W ith United's fixture list it is hard not to keep covering them for these previews even though it pains me to write about them 'objectively'. After an excellent win against Spurs, where there was some semblance of tactical cohesion and logic in Ole's game plan, we were back at square one midweek with numerous managerial blunders almost putting United's European campaign in grave danger.

The failure to select Cavani, the failure to banish Pogba from the first team squad altogether - let alone put him in an imbalanced midfield with no holding midfielder and compounding it all with a sudden shift after Varane's injury from 3-5-2 to 4-2-3-1 - were all signs of a man who is out of his depth.

Do you ever see Man City or Liverpool change shape so quickly after an injury? no because you should have been preparing the team and the squad to play in a certain system to create chemistry and muscle memory. Big systematic changes should be left for later into the second half, if Plan A is definitely not working. With United, there seems to be no overarching philosophy - they are trying to hang in there week to week. Even when Ole seemingly gets things right, he proves it was dumb luck by undoing it weeks later - see the Pogba left wing experiment.

As for Man City, a resounding win midweek was much needed after they were completely undone by Patrick Viera's much improved Crystal Palace. Viera's game plan of inviting City on to them and giving City's flanks plenty of space to work with seemed to expose City's lack of a penalty presence and lack of outside threat down their left flank. This was rectified to a degree against Brugges with Cancelo being encouraged to put in more weaker foot crosses to keep the opposition guessing.

In terms of selection issues going into this game, Raphael Varane went off injured in the first half against Atalanta and has been ruled out for a month with a hamstring problem, Fred and Edinson Cavani rotated out of the team in midweek but will both start against Manchester City on Saturday and thankfully Pogba is suspended. Lindelof is 50/50 and if he is passed fit, 3-5-2 is definitely on the cards.

As for Man City, Stones comes in for the suspended Laporte and Kyle Walker is potentially a doubt, which may see the return of Zinchenko. This could paradoxically be a blessing in disguise if it means Cancelo can bomb forward down the right and Zinchenko can provide some natural width down the left.

Without further ado, let us dive into the tactics that will decide Saturday's encounter. 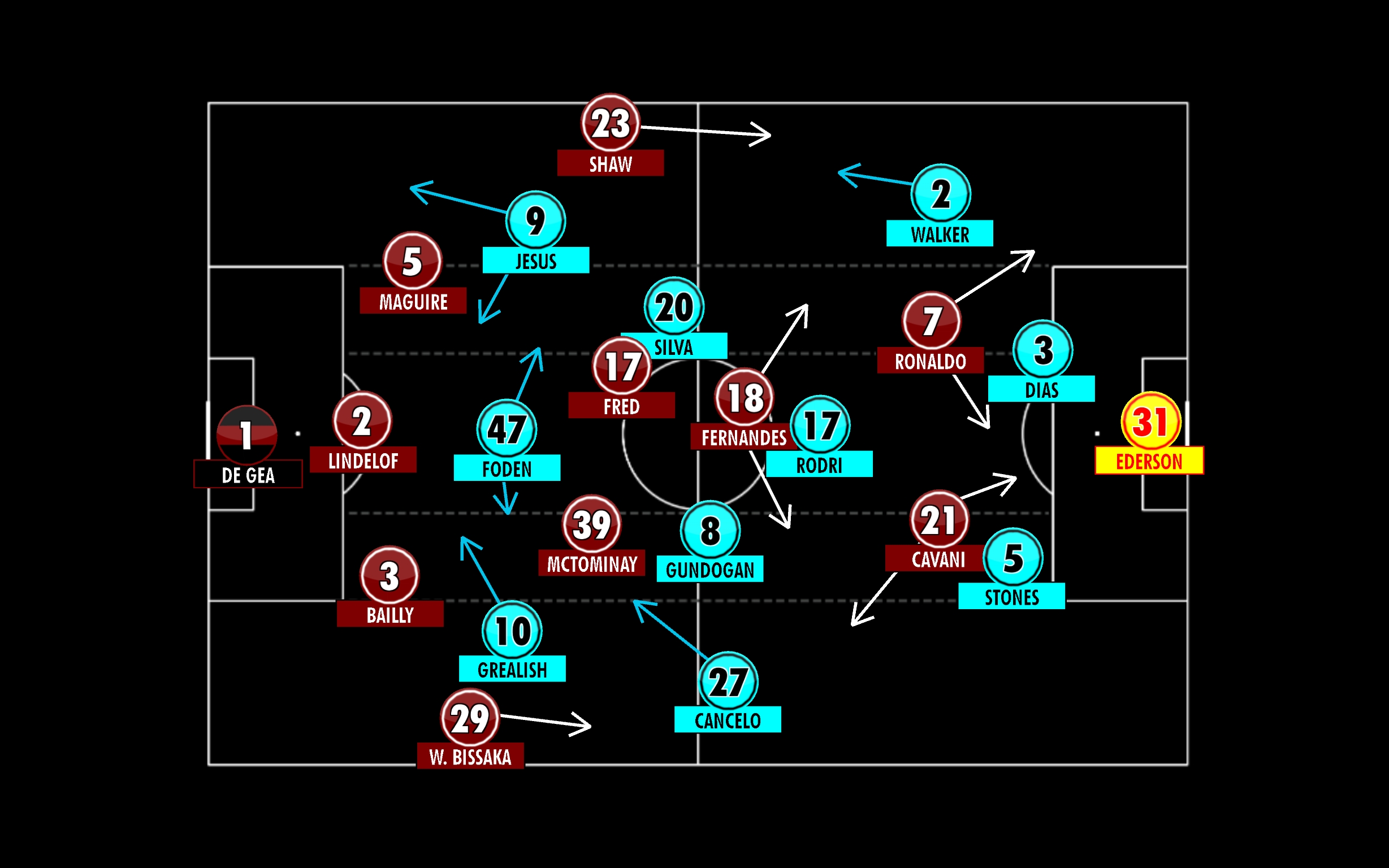 With a back three, United's build up looked more secure against Spurs although it must be said the Lilywhite's attempts at a co-ordinated press were laughable. Nevertheless Lindelof, Varane and Maguire is a very easy on the eye back three with the ball. This gives the goal keeper three options to pass it out to in close proximity thus minimising the chance of errors and it takes the pressure off Fred and McTominay in having to drop deep between the centre backs.

There is no Varane this week and that will mean Eric Bailly starting. He had a great game in midweek defensively but he can be inconsistent in possession. At times he can beat the press very well and at other times he can simply lack focus... how United beat the press will very much depend on what mood he is in and the physical conditioning of their back three collectively.

With Foden up front, Pep has adopted a more aggressive press than we saw last season and he has instructed the Englishman to hound the initial ball carrier. The rest of the team follows in waves towards that side of the pitch and the defence tends to predict where the long ball is going to land and win the aerial battle. With three centre backs to chase on Saturday it is really important that Grealish and Jesus do their part to ensure that centre back trio is put under pressure otherwise Foden will expend more energy than necessary. 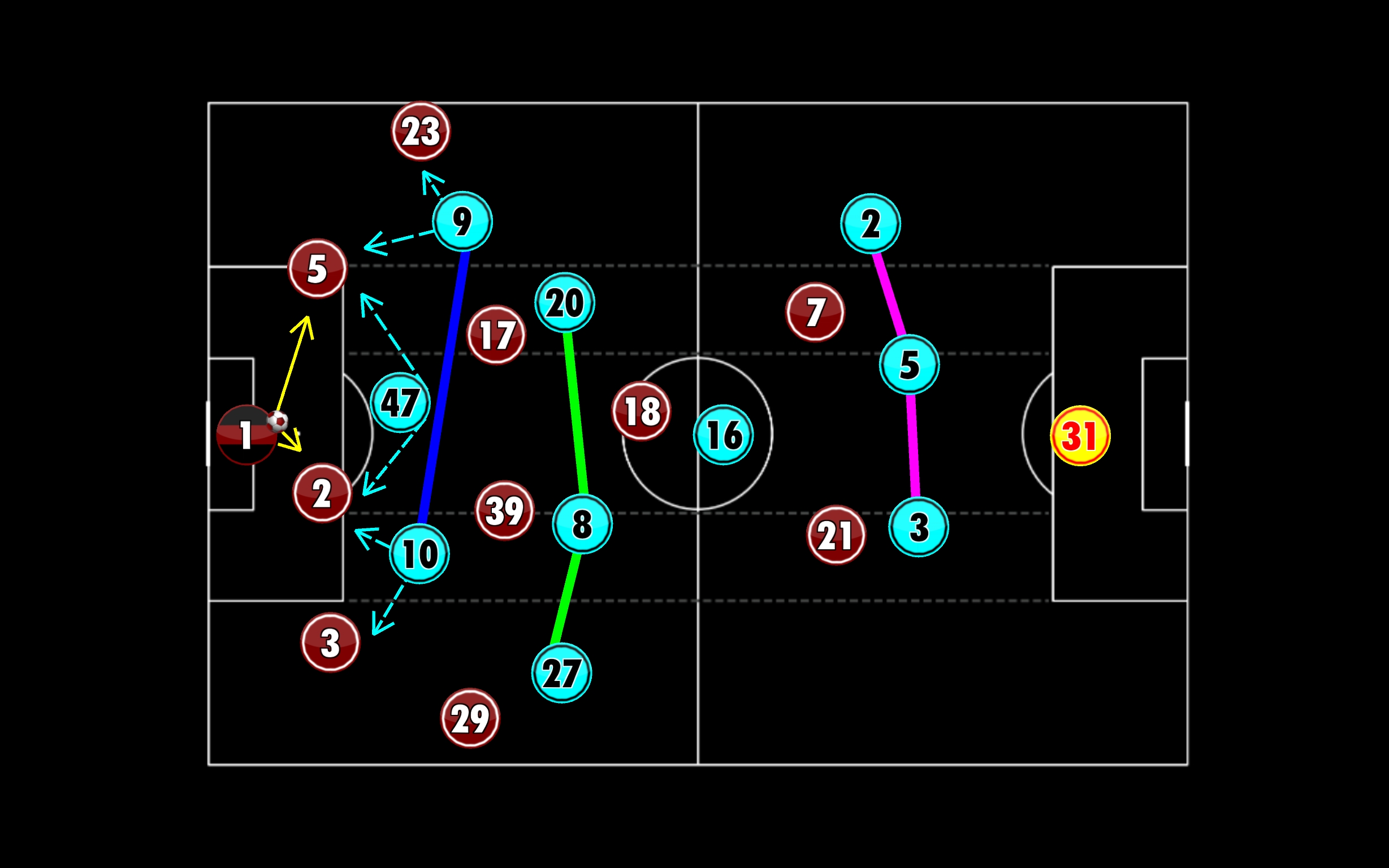 FODEN IS FIRST LINE OF PRESSURE AND THE OTHERS RESPOND ACCORDINGLY

One of the major drawbacks of the 3-5-2 system implemented by United is the lack of quality width they possess. With no Greenwood or Rashford or Sancho, there is no one in the side who can take a man on in wide areas and put the ball into the box or come in from a wide area and tap the ball in at the far post or cut in and take a shot. Wan Bissaka and Shaw looked good against a tepid Spurs but in the game against Atalanta, they looked limited even before Varane went off.

Cavani and Ronaldo look a genuine threat in central areas and I can see them getting the better of Stones and Dias. I can also see Rodri losing his battle with Bruno as he can have off days in these big games. Thus the big question is can United work that ball through to this trio often enough and in situations where the City defence is not well set. In my opinion, at home - they should be able to get at least a goal. 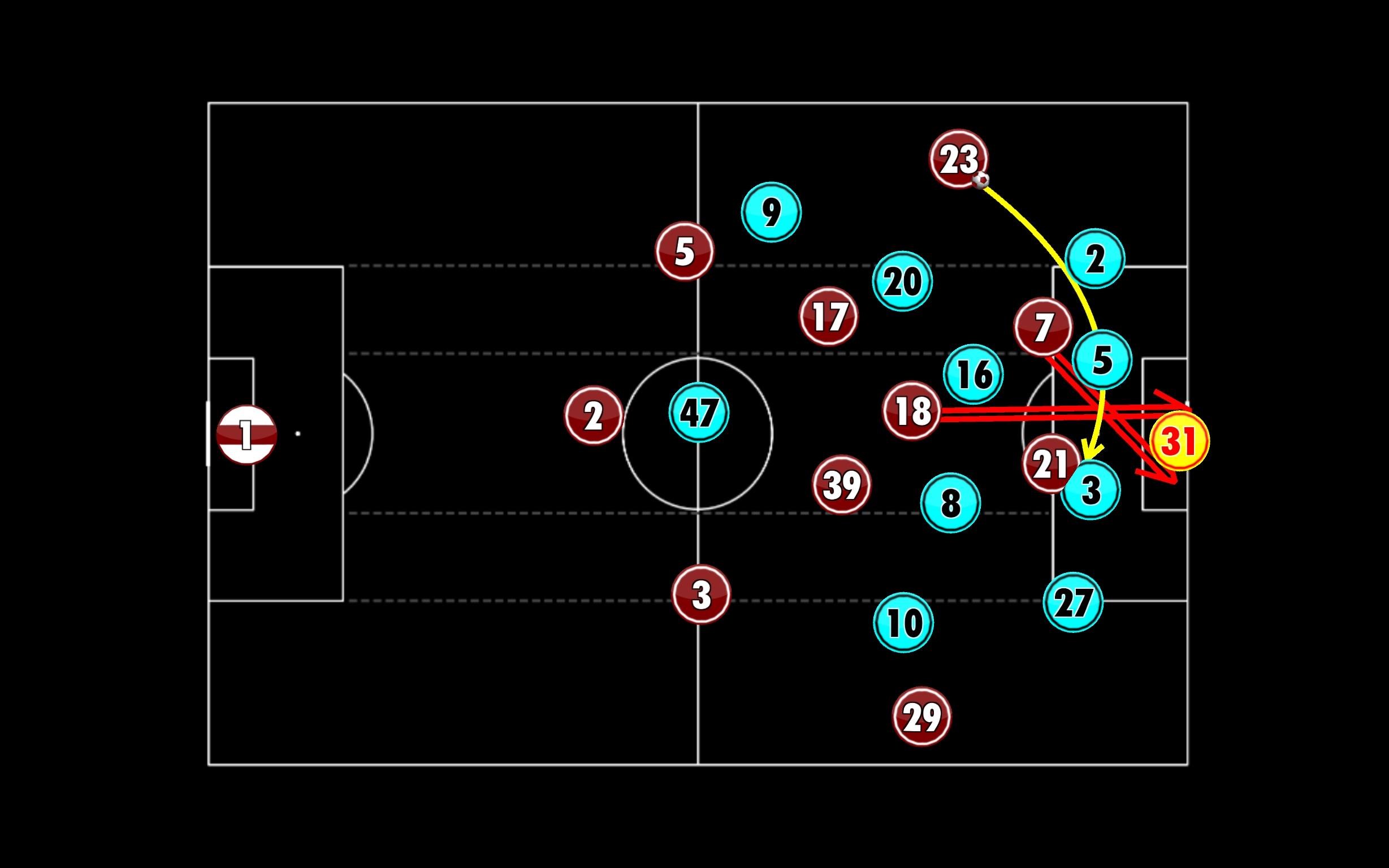 UNITED WILL RELY ON AERIAL PRESENCE AND SHOTS FROM DISTANCE

As soon as I saw Rashford paired with Ronaldo I teared my hair out in frustration. None of these forwards can hold the ball up, neither is selfless and they can't bring others into play. Cavani is a must pick for this United side and one of the major reasons for Ole's demise has been the lack of respect he has given the Uruguayan ever since Ronaldo arrived. Thankfully they both seem to get on well and there is a natural chemistry when they play together which begs the question why Cavani was not a starter in a midweek game where United's UCL hopes were hanging by a thread.

What Cavani can do is drop deep and make the ball stick. He has a fine football mind and thus his lay offs are always weighted correctly and generally to the correct option. He can also drift into channels and pick passes or cut in and shoot. He is an experienced operator in two man striker partnerships and with this shift to a 3-5-2, his selection is imperative.

As we can see from this picture, whenever the ball finds itself with Ederson - City tend to adopt a 3-3-4 structure where Walker becomes the third centre back and Cancelo forms part of the midfield alongside Rodri and the right sided CM. It is a different way of building up to Liverpool, where Robertson would be hugging the touchline and Trent would try and get out of this back three structure as soon as possible and get himself on the underlap/overlap. City take their time in these areas whereas Liverpool's tempo is higher and they want to get into opposition territory as soon as possible.

It is highly likely that after the Liverpool debacle, United will probably just sit in and avoid confronting this City backline. But as we suggested against Liverpool, the key thing to do against these top sides is to sporadically engage in a coordinated aggressive press and let them know that you are in the game. Palace were able to rock Laporte by using Zaha to put him under pressure and when City got through the press, then Palace would drop into a very low deep block. If United are just super passive, then the whole game will be dictated to by City. 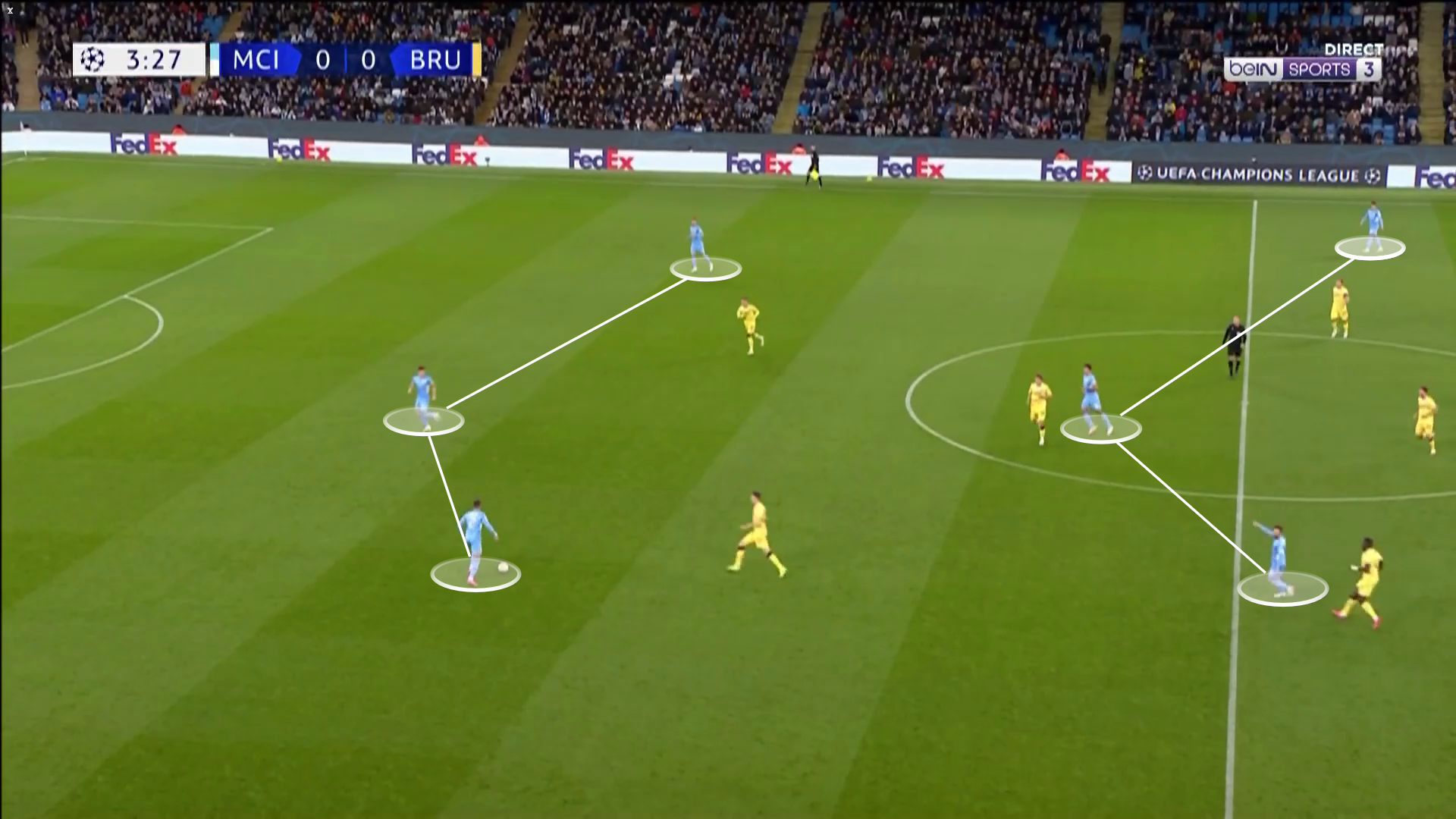 CITY'S 3-3-4 STRUCTURE IN THE BUILD UP PHASE

One of the biggest tactical flaws of this City side is its left flank. There is no balance there in terms of underlap and overlap. It is all coming inside into traffic. Now Cancelo and Grealish are both incredibly gifted and more often than not, they still find their way through and make an impact but it is not ideal. Foden drifting out to the left would rectify this problem to a degree but Grealish just looks ineffective when he's moved away from the left flank.

The other issue that City have is the absence of a box presence. Foden is a wonderful false 9 but if we look at systems in which such a front three is deployed, the goals have to come from the wide forwards - think Salah and Mane, Bale and Ronaldo. We are also forgetting that Firmino and Benzema were strong in the air. Do City have anyone who can head the ball and do they have a wide forward who can score 40 goals in a season? If teams adopt the Crystal Palace blueprint, there will be more examples of City coming unstuck.

This United backline is really vulnerable on the transition at the moment. Shaw is still all over the place, Maguire got abused by Zapata in midweek and Lindelof's biggest weakness is fast transitions. Only Bailly and Wan Bissaka excel at this type of defending.

Whilst it is true that City should have most of the ball and in theory, United should not face many negative transitions - they are at home and at some stage they will need to come and attack. Foden's movement in these scenario's is excellent and he has a flawless first touch which means he can pluck the most difficult of long balls and drive at the opposition. Jesus in that space between Maguire and Shaw is also a key concern.

FODEN'S ABILITY ON THE COUNTER IS UNDERRATED

Ole's record against Pep is solid. He is undefeated for two games and I would not put it past him to secure a result here. In many ways he has stumbled onto a formula, with Pogba's suspension and Ronaldo probably putting pressure behind the scenes to ensure Cavani plays. This gives United a decent platform against a City side that dislikes playing against a team which can congest the game down the middle and transition well into attacking areas.

Prediction… If City are to win this, Foden will need to make mugs of Fred and McTominay by exploiting their lack of defensive awareness and he needs to destroy United in transition. Gundogan is also an incredibly important player in these big games and his deceptive goal threat could also be key if the game gets congested. I would also drop KDB as Bernardo is in excellent form at the moment. As for United, I can see them squeezing out a draw but a win seems unlikely. Leaning towards a City win...

Raees aka ‘Pythag’ is the Founder and Creative Director of Pythagoras in Boots. He was a football coach at West Bromwich Albion and is a lifelong Manchester United fan and an all-round sports obsessive. 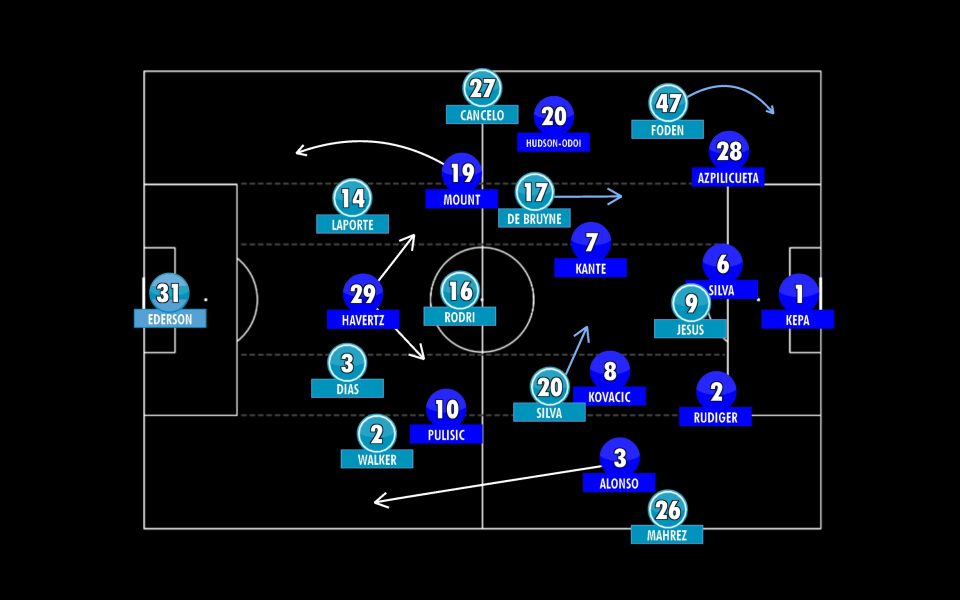 #MCICHE: THEY THINK ITS ALL OVER 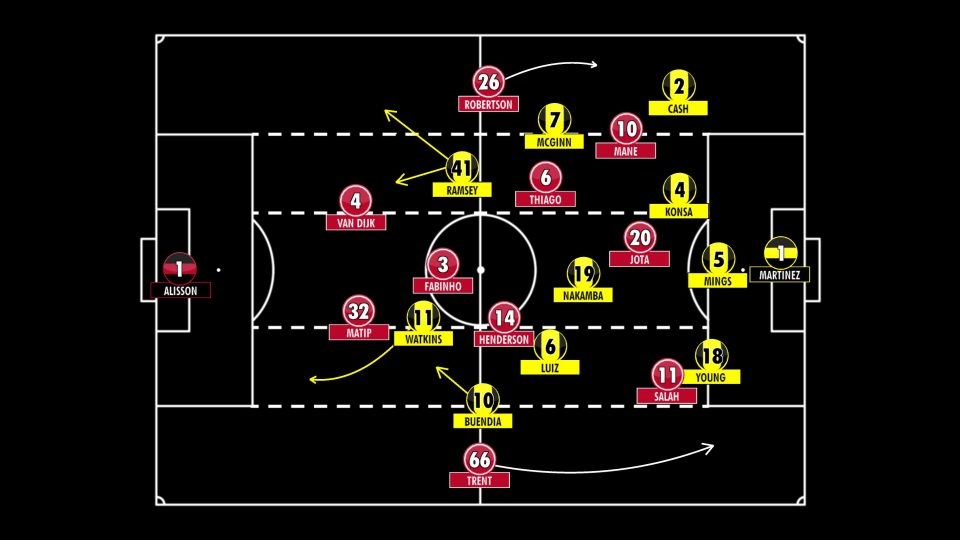 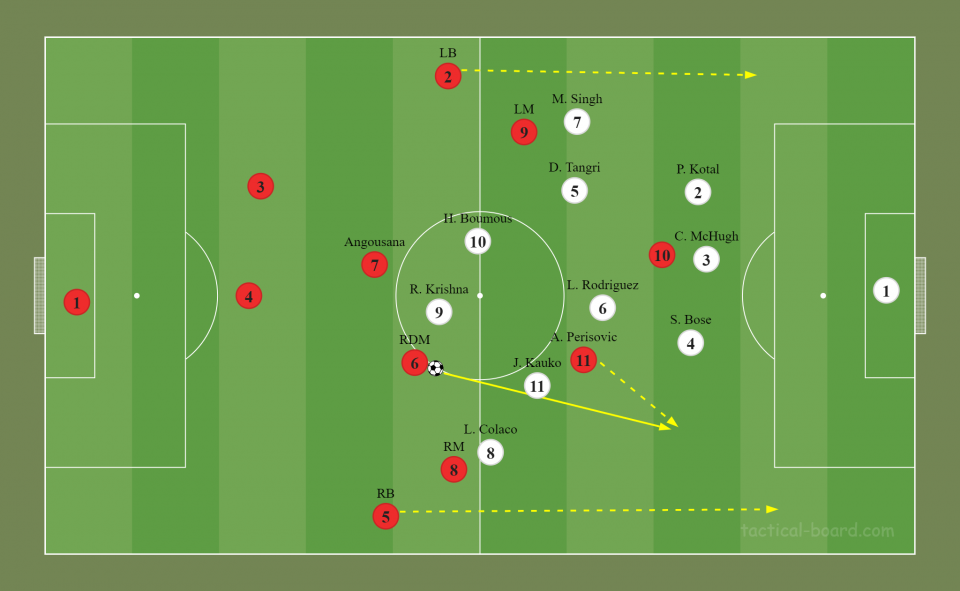 Receive our newsletter and get all your exclusive content first!